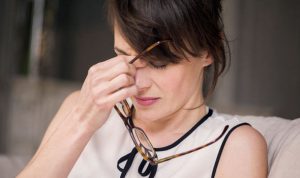 A study conducted by the National Hospital for Neurology and Neurosurgery found that water deprivation can lead to headaches in some cases. Not only are people not drinking enough water, but they are also consuming alcohol, caffeine and sugary drinks that come with their own dehydrating properties. Because of this, I often tell people who are suffering from a headache to first drink a big glass of water.

You may not realize when your body is beginning to feel dehydrated, but a good rule of thumb is this: Drink enough water that you never have the chance to get thirsty. You can also supplement your water with lots of fruits and vegetables—like cucumber, strawberries, cauliflower and spinach—as many have a very high water content.

I’m a strong believer that food is medicine, and I believe that many illnesses or health conditions are a result of something missing in the diet. Magnesium is a critical mineral utilized by the body for more than 300 biochemical functions, and it is estimated that as many as 80% of people have a magnesium deficiency.

People who suffer from serious headaches like migraines are typically low in magnesium, but supplementing with magnesium is much safer than taking a painkiller. With just 200-600 mg per day, magnesium may prevent the visual and sensory changes that are common when experiencing a headache, while also blocking the pain-transmitting chemicals in the brain.

Essential oils are made by distilling or extracting the organic compounds from various plants, and they have been used for thousands of years as powerful healing agents. Two essential oils, in particular, have great ability to relieve headaches, thanks to their calming and numbing properties.

First, peppermint oil has a cooling effect on the skin and also stimulates an increase in blood flow when applied to the forehead, thus soothing muscle contractions.Lavender oil also has known effectiveness and safety in treating migraines. A 2012 study found that out of 129 headache attacks, 92 of them were minimized or eliminated when the participant inhaled lavender oil.

Much has been made about the potentially negative health aspects of gluten in recent years, as now, nearly every grocery store has an extensive selection of products that are free of the protein found in wheat, barley and rye. This is especially important for celiac sufferers, with the National Foundation for Celiac Awareness finding that people who have both undiagnosed celiac disease and migraine headaches see their symptoms significantly reduced or eliminated after giving up gluten.

But while media reports indicate that only those who suffer from celiac disease should eliminate gluten, the reality is that there are many people who have a gluten sensitivity and should avoid the protein as well. To determine if this applies to you, I recommend avoiding gluten for three weeks, and then adding it back in slowly while closely monitoring how your body responds.

Stretching is, by far, the easiest and cheapest way to help relieve headache pain because it only involves moving your body! A 2012 study conducted by Finland’s Department of Physical Medicine and Rehabilitation found that, over the course of a year, women who participated in a stretching program saw a 69% decrease in headache frequency and symptom intensity.

So how can you replicate these results on your own? Make it a point to take a break every 30-60 minutes and do some light stretching, especially if you work at a desk all day. And you can ramp up the healing power of stretching by practicing yoga, an activity which has been shown to relieve built-up tension, increase circulation, clear the mind and loosen muscles.

How To Get Strong And Healthy Teeth: 5 Tips To Keep Dental Problems Away.