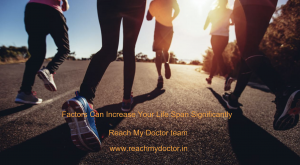 The oldest person to have walked this earth went to live on for 122 years. Yes, you read it right, 122 years!! I’m pretty sure at some time, you wondered “How did the person manage to live for so long?” If popular beliefs are to be considered, life longevity is linked to genetics but if we go by scientifically backed up evidence, a lot of it points to the fact that genetics play a very minor role and long life is, indeed, heavily influenced by the lifestyle choices you make and social circles you associate yourself with.

So if you are a little careful about your lifestyle choices, environmental triggers and social ties, you might just live on to witness your 100th birthday!

Read on to know about the factors that contribute to a longer and more fulfilling life.

Go nuts: No no, it is definitely not the ‘going nuts’ that you are thinking about. What I meant is that adding a couple of nuts to your diet will play a huge role in increasing your lifespan. According to a study titled ‘Nut consumption on all-cause, cardiovascular, and cancer mortality risk: a systematic review and meta-analysis of epidemiologic studies’, subjects who consumed nuts on a regular basis had approximately 27% lower risk of premature death. In another study on old people aged between 55-80 years, it was observed that the subjects who consumed nuts at least 3 times in a week had a 39% lower risk of premature death.

Choose happiness, every single time: You wouldn’t be surprised if I told you that a happy man leads a longer life. According to the article ‘Happy People Live Longer: Subjective Well-Being Contributes to Health and Longevity’ published in the journal of Applied Psychology: Health and Well-Being, Vol. 3, No. 1, feeling happy can significantly increase your lifespan . A long-term study on 180 Catholic nuns showed that the nuns who felt the happiest at the age of 22 were 2.5% more likely to be alive after six decades. A comprehensive review of 35 studies shows that happy people tend to live longer than their unhappy counterparts by as much as 18%.

Kick the butt for good: If you need a concrete reason to let go of smoking, then you should know that people who quit smoking before the age of 35 increase their lifespan by 8.5 years according to a study titled ‘Benefits of Smoking Cessation for Longevity’ by Donald H. Johnson Jr. In addition to that, smokers lose more or less ten years of their life and are three times more likely to die prematurely. No matter how old you are, it is never too late to quit smoking and it will definitely add more years to your life.

Choose the right social circles: Socializing is known to ease the mind and relieve stress. If that isn’t enough, Berkman and Syme have found out that having strong social networks can increase your lifespan by 50%, according to their study titled ‘Social networks, host resistance, and mortality.’ According to another study on socially isolated patients with coronary artery disease, it was observed that having as few as 3 strong and dependable social relationships can decrease the risk of premature death by 200%.Strong social ties also affect the mind and body in a positive manner which makes them less susceptible to chronic illnesses.

Lead a goal oriented and disciplined life: As research has it, being organized, focused and goal oriented not only has short-term benefits but also adds more time to your lifespan by 11%. According to a study by Renee D Goodwin and Howard S Friedman, conscientious people are less likely to fall prey to psychiatric issues, diabetes, joint pain, and heart related issues. Being conscientious not only increases your lifespan but also adds chunks of productivity to your day to day life.

It is clearly established that your life longevity depends majorly on how you choose to live! Make the right choice and always prioritize your health!

For any health-related questions

Did You Know These Crazy Facts About Hormones?